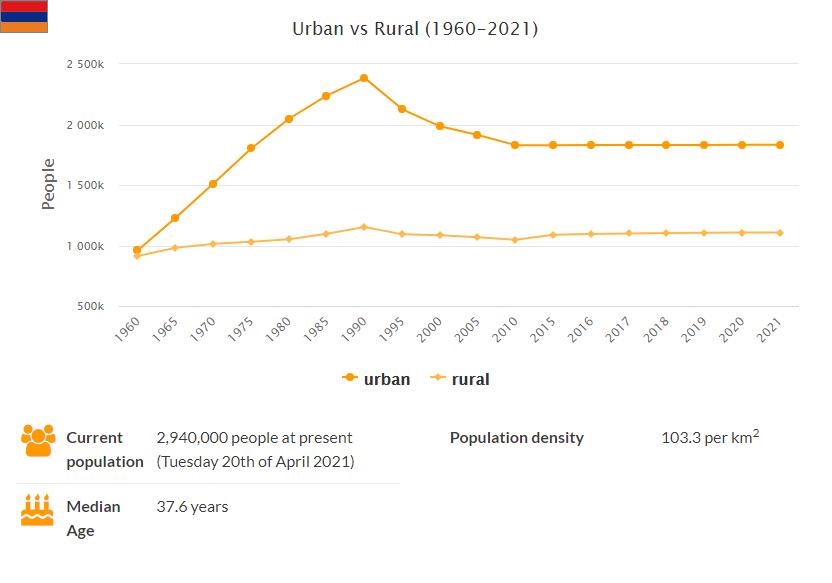 An earthquake in 1988 killed 25,000 Armenians and left 400,000 homeless, ie. 1/8 of the residents. In the early 1990s, hundreds of thousands of refugees came from the Armenian-dominated region of Nagorno-Karabakh in Azerbaijan, and the war that followed between Armenia and Azerbaijan led to a sharp decline in the Armenian economy, resulting in increased poverty and malnutrition. Between 1992 and 1997, 600,000 emigrated, and emigration has continued even after that. In 2010, at least 4 million Armenians were estimated to live abroad, most of them in the Russian Federation and the United States. During the 1990s, conditions were stabilized and economic growth increased. Social conditions improved significantly, especially in the cities. The proportion of extremely poor people fell from 15.5 percent in the entire country in 1996 to 3.7 percent in 2007. Check to see Armenia population.

The large emigration since independence has made cities grow very slowly, and there has improved housing and service conditions. However, the countryside is slipping by the level of living. Money that emigrated Armenians send to their families is of great importance in the families’ finances. During the global economic crisis of 2008-09, these cash flows drastically decreased and poverty increased in the country. Visit AbbreviationFinder to see the definitions of ARM and acronym for Armenia.

From Soviet times, Armenia inherited specialist and hospital-focused healthcare, free of charge but centralized to the capital and infiltrated by corruption. The country has received extensive development assistance from the United States and from humanitarian organizations. Thus, it has been possible to focus healthcare on decentralized primary care and preventive measures, and the state of health improved significantly during the 1990s. Since the 1990s, there is also private healthcare. In 2006, there were 37 doctors and 44 beds per 10,000 residents in the country. At all births there are qualified healthcare personnel.

In 2008, about 95 percent of the population had access to clean water and 88 percent had good sanitary conditions.

The retirement age has been raised for women and in 2011 it was 63 years for both men and women. Old-age pensions and other benefits in social insurance have increased significantly since the mid-1990s, from a previously very low level.

In 2007-08, unemployment was estimated to be just over 7 percent, but it rose significantly in 2009. However, the scope is difficult to estimate, as many work in a ※gray§ informal sector.

The Armenian Church was already evangelized at the beginning of the 3rd century; at the beginning of the 4th, s. Gregory the Illuminator obtained from King Tiridates the recognition of Christianity as a state religion. With the Catholicosate of Sahak (beginning of the 5th century), the adoption of the Armenian alphabet made possible the liturgy in the national language and the autonomy of the Armenian Church from the see of Caesarea and Constantinople became definitive. The Armenians remained extraneous to the Christological controversies and did not participate in the councils of Ephesus (431) and Chalcedon (451); but, having been supported by the emperor Anastasius, the katholikòs Babken accepted the Enotic of Zeno. The Monophysite trend served the Armenians, especially under Muslim domination, to differentiate themselves from the Byzantines.

At the end of the 13th century, after the establishment of the kingdom of Armenia Minor in Cilicia, the Catholic seat was transferred from Ečmiadzin to Sis (today’s Kozan); this accentuated the disagreement between the western and eastern Armenians, also because the westerners tried to have good contacts with Rome. As a reaction to these contacts, the autonomist tendency of the Orientals became stronger: an Armenian patriarchate was created in Jerusalem, detached from that of Sis (1311), and when with the fall of the kingdom of Cilicia (1375) the see of Sis began to decline, the schism took place, with the reconstruction of the catholicosate of Ečmiadzin.

The Turkish conquest of Constantinople aggravated the situation: in 1461 Muhammad II invested Joachim bishop of Brussa of the Armenian patriarchate of Constantinople, considering him as the civil, as well as religious, head of all the Armenians of the Ottoman Empire. The disagreement between the two Catholics was composed in the synod of Jerusalem (1651), in which the pre-eminence of Ečmiadzin was recognized. In the 18th century. the katholikòi of Ečmiadzin began to show themselves hostile to the Catholic Armenians, who aspired to have their own organization and churches. In 1741 the katholikòs of Sis, Abraham Pietro I Ardzivian, who had received the pallium in Rome from Benedict XIV and prevented by dissidents from entering his seat, he settled in Kraim in Lebanon and created the Armenian Catholic Patriarchate of Cilicia.

With the treaty of Turkmanciāi (1828) the see of Ečmiadzin became part of the Russian Empire, which in 1836 reorganized that part of the Armenian Church according to the principles of dependence on the state prevailing in Russia. In the Ottoman Empire, the Turkish Armenians’ sympathy for Russia was a pretext for mutual accusations between Catholics and Orthodox, which provoked very serious persecutions (1827-28). The Austro-French intervention, invoked by the Sultan Mahmūd won by the Russians, served these powers, at the request of Pope Leo XII, to introduce in the treaty of Adrianople the clause of the emancipation of the Armenians, which allowed Pius VIII to create the primatial Armenian-Catholic see of Constantinople (1830).

In 1866 the synod of Bzommar reunified the Catholic patriarchate of Cilicia and that of Constantinople in the person of Antonio Hassun, who in 1880, called to Rome, obtained the erection of the Armenian Pontifical College (1883). The genocide perpetrated in the years 1915-18 forced the patriarch of Sis to transfer his seat before Aleppo and then, in 1930, in Antelias, north of Beirut. The Catholic patriarchate was transferred to Beirut, with residence in Bzommar.