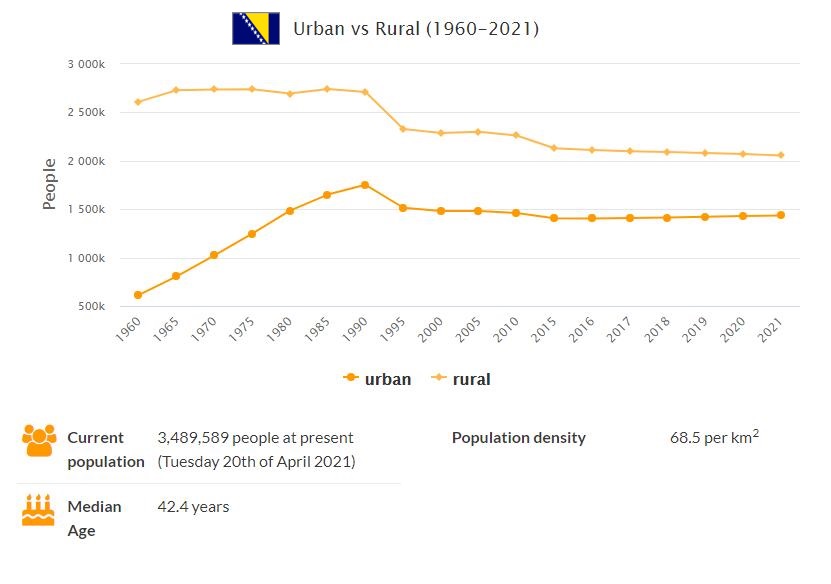 The Dayton peace agreement in 1995 meant that the country was divided into two major units, the Federation of Bosnia and Herzegovina and the Serbian Republic, as well as the small Brčko district. The federation, in turn, is divided into ten cantons with far-reaching decentralization. Laws and regulations differ between the different parts of the country, as do the principles for financing, for example, education and social grants. The political units have, among other things, different labor market legislation and different social insurance systems. Visit AbbreviationFinder to see the definitions of BIH and acronym for Bosnia and Herzegovina. 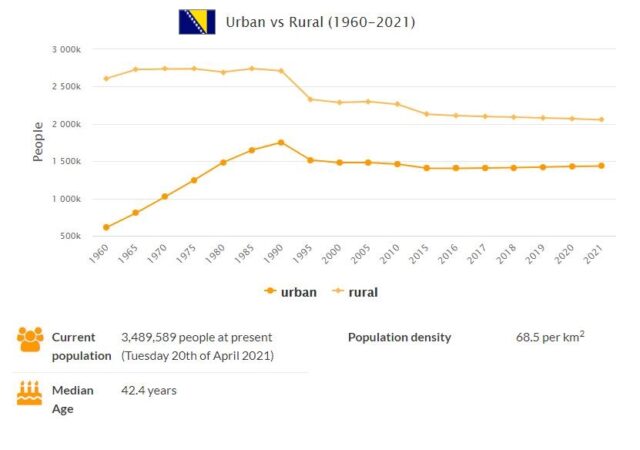 The war in 1992-95 meant that millions of residents were forced to leave their homes. Schools, hospitals and other infrastructure were destroyed. Reconstruction and relocation continued throughout the 1990s, and many thousands of internal refugees still have not been able to return home.

During the mid-1990s, the country’s economy grew significantly and living conditions improved. Many households received financial support from relatives who worked in Western Europe. The global financial crisis and the subsequent euro crisis led to a stagnation of growth. In 2013, it was estimated that 20 percent of the population lived below the national poverty line. Particularly at risk are the disabled, internally displaced persons, the unemployed, minorities and families with many children. The social security system that existed during the socialist, Yugoslav era has almost completely eroded.

Unemployment has been very high during the 00s and since 2010 it has increased further. Officially, it was around 45 percent in 2013 and it was even higher among young people. However, many work in the informal sector and if they are also included, unemployment is about 30 percent (27.5 percent in September 2013 according to the ILO).

The normal working week is 40 hours and paid holidays include 18 working days. Trade unions exist but they are weak and the movement is unknown to many. Labor legislation exists, but in many cases the laws are not followed. A study of commercial employees in 2010 showed that 20–25 percent worked under illegal conditions with too long working days, unpaid overtime, no paid vacation, no social insurance through work and with wages below a set minimum level. This reflects the conditions of those employed in the informal sector.

Those who have formal employment, regulated by agreement with the employer, through the work have both health insurance for themselves and their family as well as pension, accident and unemployment insurance. The pension starts to be paid out at the age of 65 and its size depends on how large the contributions have become. Old people who do not have pension insurance can get social assistance when they need to be tested. However, it amounts to a minor part of what is needed for the recipient to cross the poverty line. The same goes for severely disabled people.

When the country’s economic situation worsened at the end of the 1990s, the requirements for social assistance were tightened. At the same time, a large part of the social budget went to grants and benefits, without need testing, to war veterans, invalids and survivors to those who participated in the war. The number of such beneficiaries quadrupled between 2005 and 2012. They are compensated according to a complex system and receive multiply higher contributions than the poor needy without relation to the war receive. This has been criticized both outside and within the country as it is considered an unfair system. The large veteran grants have also become a financial problem as they devour budget funds that could be allocated to other investments, for example in infrastructure. In 2012, the Serbian Republic began to change the rules on veteran support.

One year of statutory maternity leave exists throughout the country for those working in the formal sector. They receive full salary compensation in the Serbian Republic but only part of the salary of the Federation of Bosnia and Herzegovina. Some cantons in the 2010s did not see themselves able to pay maternity allowance or social assistance. As regards the size of child allowances, there are differences between the two political units, within the Federation of Bosnia and Herzegovina, also between the cantons. All in all, this means that many multi-child families do not have enough money to fully meet the necessary needs. In 2011, UNICEF estimated that a quarter of all children in the country lived below the poverty line.

Sickness pay and health care expenses for everyone in the family are covered by the health insurance that the employed have in the formal sector. There is no such support for those working in the informal sector and for the unemployed. In 2011, therefore, 20 percent of the population lacked health insurance. In theory, uninsured children and pensioners should receive free healthcare. but some cantons cannot fund it. Women who do not have formal work are referred to their husbands health insurance. One covers all or part of the healthcare costs but does not apply to medicines.

The publicly funded healthcare in Bosnia and Herzegovina has major shortcomings, both in terms of equipment and well-trained workers. The shortcomings are larger in the countryside. There is also private healthcare, mainly in larger cities.

The ethnic divide was sharpened during the war and the politicians then did not face the challenge of unifying the country. An ethnic group that is locally a minority can often experience discrimination both in working life and in terms of access to education and social insurance. A law from 2009 prohibits both ethnic discrimination and gender discrimination. Alongside the three large ethnic groups Bosnian Muslims (Bosniaks), Bosnians Serbs and Bosnian Croats, there are some small minorities, together some percent of the population. The most vulnerable of them are the Romans who are victims of widespread discrimination. Very few Roma are in the formal labor market and all the rest are outside social insurance. Many Roma do not have identity documents and without them a family will not have access to education, medical care and social assistance.

Women’s opportunities to participate in social life are still limited, for both cultural and structural reasons. In 2011, it was estimated that just over a third of the country’s women had income-generating work, the lowest figure in Southeastern Europe. Many women have short education and public childcare has become increasingly uncommon. So far, no woman has served on the country’s Council of Ministers and only one or two of the Heads of Department have been women. Women have about a fifth of the seats in Parliament. Similarly, there are only a few women on high positions in business and administration.

The legislation against gender discrimination has so far been of little importance. Those who work for the rights of sexual minorities are exposed to threats and harassment. Attacks against LGBT people very rarely lead to prosecution. Same-sex cohabitation and marriage are not recognized by law.

There is no harmonized legislation between the different parts of the country and the legal institutions are weak. An overloaded and ineffective legal system can mean many years of delay before cases are decided. A host of war crimes targets in the 1990s are still waiting to be addressed. Many thousands of victims of violence during the war have not yet received compensation. A bill on the rights of victims of sexual violence during the war was stopped in 2012.

In 2005, the two major regions passed laws on protection against domestic violence, but they are hardly used in practice. Violence against women is a widespread social problem and child labor is not illegal. Only a few reports of violence against women in the home have led to prosecution.

Corruption is widespread at various levels in society and can range from bribes to faster treatment in healthcare to payments in the illegal privatization of state-owned companies. Organized crime linked to government officials also occurs. In violent demonstrations in Tuzla and Sarajevo as well as several other cities in the winter of 2014, politicians were severely criticized for not fighting corruption.