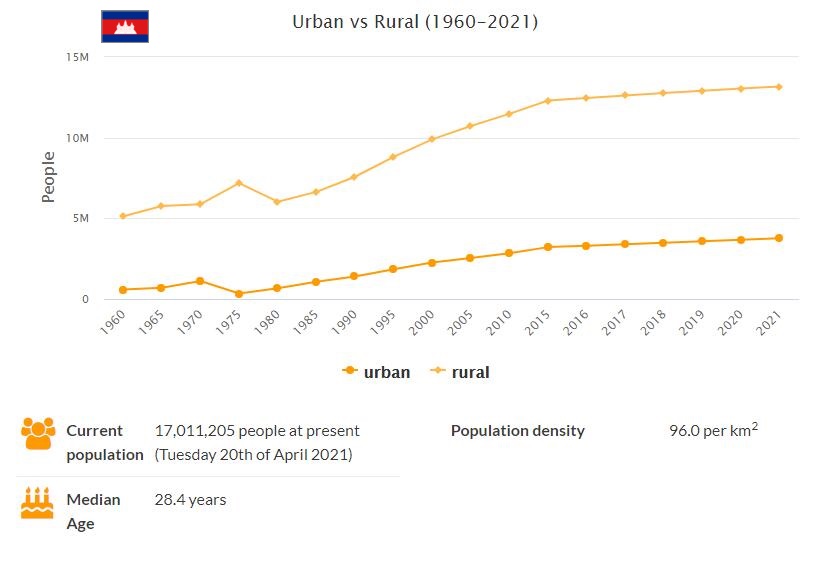 The war in the 1970s and the terror of the Khmer in the aftermath severely hampered the country’s economic and social development. The Khmer target was to cleanse the country of “harmful Western influence”. The cities were depleted, the residents displaced, the infrastructure decayed and people with education – teachers, doctors, engineers, intellectuals – systematically murdered. Nearly half the population lived in extreme poverty as late as 1994. In 2007, over 25 percent of the population was extremely poor and lived on the equivalent of less than one US dollar a day. Cambodia was then one of the world’s five poorest countries in the world, calculated by the proportion of very poor. Check to see Cambodia population. 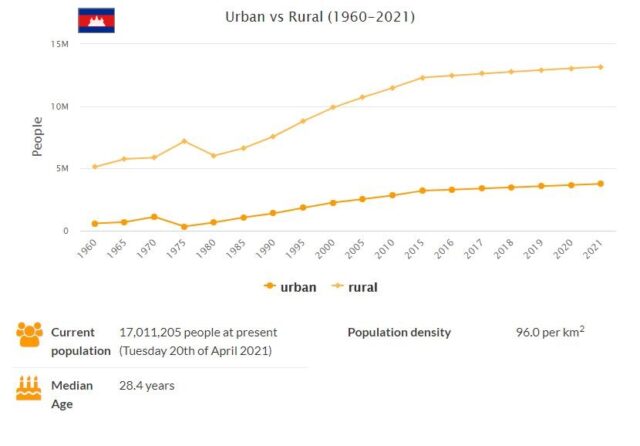 The majority of the population lives in the countryside and many villages still lack road connections, at least during the rainy season. Self-management without secure monetary income is common among the peasants and therefore they cannot pay for more comprehensive healthcare. They must then sell land or pets or borrow money at an interest rate. Many people resort to state healthcare only when the situation has become really serious; otherwise they visit simple, private health care, pharmacies or villagers who practice traditional medicine. The vast majority of women give birth to children at home, usually without the help of an educated midwife.

It is common that rural hospitals do not have access to electricity and many smaller hospitals lack, for example. laboratory equipment. The most serious is the lack of trained healthcare personnel. Wages are low and most people want to stay in the metropolitan area where health care has better quality. There are also private clinics and doctors with good education. The large shortage of midwives is reflected in maternal mortality associated with pregnancy and childbirth, 54 cases per 10,000 live births (2005), among the highest numbers in the world. In the mid-1990s, there were 16 doctors per 100,000 residents. The average for the countries in Southeast Asia was nine times higher.

According to estimates in 2005, almost 80 percent of the urban population lived in slums. Access to clean water has improved during the 1990s, but still in 2008 only 56 per cent of rural households and 81 percent were in urban areas. Access to toilets and drains was even worse. There were only 18 percent of rural households and 67 percent in urban areas. Other important causes of the high mortality rate are that 25 percent of the population (2008) is malnourished, mainly younger children and women. In 2007, HIV/AIDS was among 0.8 per thousand of all people aged 15-49, the highest number in East and Southeast Asia after Thailand. Deaths due to pneumonia and tuberculosis are more common than elsewhere in the region, and the proportion amputated after a landmine detonated is highest in the world.

Most of the health care must be covered by aid. Employees and entrepreneurs have a social insurance system based on many years of payments. This includes pension paid from the age of 55 and sickness and occupational injury insurance. About 3/4 of the population has jobs that provide low and uncertain income, and the vast majority of them cannot pay insurance premiums. Women traditionally have low economic and social standing. Visit AbbreviationFinder to see the definitions of KHM and acronym for Cambodia.

Phnom Penh, Cambodia’s capital; 2.2 million residents (2011). Phnom Penh is located on the mouth of the river Tonle Sap in Mekong. South of the city, Mekong splits into two on its way to its delta; hence the area’s old name Chattumuk ‘the four rivers’. It is an important trading town, and from the river port there is north to Lake Tonle Sap and south to Vietnam and the South China Sea. Ethnic groups such as Malays, Chinese, Indonesians and Vietnamese have played a significant role in the city’s history, making it a regional center of trade and power. The Old Town is the center of the Great Market and the many temples. Under the French colonial rule of the 1860’s, the city was built with wide boulevards, administration buildings, a national museum and library as well as educational institutions, hotels and large villas. The imperial palace was built in 1866 and the silver pagoda near the palace erected in 1892.

Phnom Penh is characterized by smaller industries, especially rice mills, and retail. Rice, cotton, rubber, dried fish and gems are important commodities, and in the 1990’s, the city has also attracted investment from wealthier Asian countries. A clothing industry is growing rapidly in the late 1990’s. Unlike neighboring Vietnam, actual development after the 1900-ts wars has barely started. However, the city is experiencing a growing interest from the tourists, who among other things. can see the remains of the Pol Pot era barbaric in a small museum. There are indications that the city has become a prime destination for pedophiles and other sex tourists.

After Siam’s conquest of Angkor in 1431, the capital of the Angkor kingdom was moved to the Phnom Penh area. The location was temporary, however, and the city became a.k.a. burned to the ground by the Siamese in 1772. It was not until 1866 that Phnom Penh again became the capital of Cambodia in the newly conquered French colony. During the Indochina War (1946-54) and the Civil War in the 1970’s, Phnom Penh grew due to refugee flows from rural areas from approximately 500,000 to approximately 2 million In the Khmer Rouge takeover of power in 1975, the city was evacuated, many buildings destroyed, and only a few functions maintained. When the Vietnamese entered the city in 1979, it was slowly re-populated.