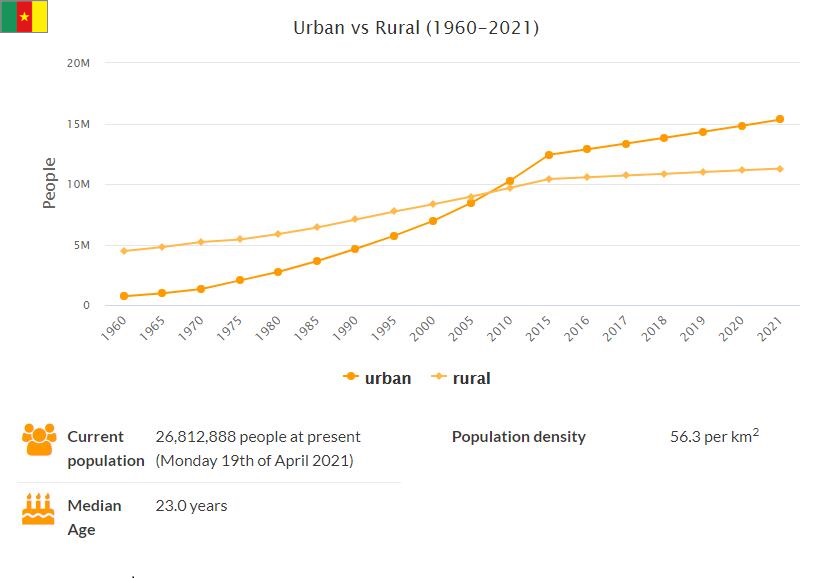 Despite abundant natural resources and good agricultural conditions, about 1/3 of Cameroon’s population is still living in poverty (below US $ 2 per day). In the countryside, every other Cameroonian lacks access to clean water. Visit AbbreviationFinder to see the definitions of CMR and acronym for Cameroon.

The most common cause of death is HIV/AIDS; About 5 percent of the population aged 15-49 is estimated to be infected (2009). Other common diseases are malaria, tuberculosis and whooping cough. Health care is run in Cameroon, both by state and by various mission societies. There are 15 hospital beds (2006) and two doctors (2004) per 10,000 residents. Qualified personnel are available for just under 2/3 of deliveries. Of the total government expenditure in 2009, 8 percent went to the health sector. Check to see Cameroon population. 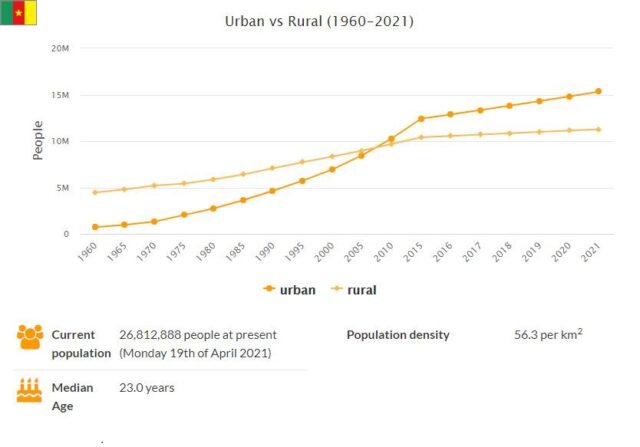 The position of women is weak in Cameroon. Polygamy is common, as is violence against women. Rape is prohibited by law, but few perpetrators are brought to justice. Genital mutilation (female circumcision) is not prohibited and in some parts of the country almost all girls are subjected to this type of intervention. The proportion of girls who start school is lower than the proportion of boys and just over half of women are professionals. Of the country’s MPs, 14 percent are women.

From 2013, the Nigerian militant-religious movement Boko Haram expanded its presence in northern Cameroon. The movement had for several years already used that tactic to retreat across the border to Cameroon when pursued by Nigerian soldiers. The Cameroon military was not interested in clashes and therefore avoided confrontations with the movement. But in February, Boko Haram went on the offensive, kidnapping 7 French tourists in northern Cameroon; in November a French priest and in December carried out attacks on several villages in the region. The French tourists were released after 2 months, after the French state paid 3.15 million euros. US $ in ransom. In May 2014, Boko Haram kidnapped 10 Chinese construction workers and attacked villages in the region for the rest of the year, taking prisoners and abducting children. In December, it went into direct attack on Cameroon’s military. The military responded again by bombing Boko Haram camps and a military base movement had taken over. Boko Haram again responded to the escalation by attacking military posts in a wide range of places in northern Cameroon to spread Cameroon’s military over a large area. The clashes between Boko Haram and the military grew further in early 2015, and at the same time the movement escalated its attacks on villages. But through 2015, the movement was weakened by a strengthened Nigerian military offensive and therefore moved to more desperate modes of action. In October, 2 female suicide bombers killed 9 people in Mora and several suicide attacks followed through November and December. Also in October, the first 90 out of 300 North American military advisers arrived.

Throughout 2014-15, Cameroon welcomed hundreds of thousands of refugees from the conflicts in neighboring countries. By the end of 2015, 180,000 civil war refugees in the Central American Republic were living in inhuman conditions in camps in southern Cameroon, and in the north, 50,000 Nigerians were living in camps. 75% of these were children aged 8-17.

Boko Haram continued its terror campaign in northern Cameroon through 2016. It carried out suicide targeting civilians in markets, mosques, churches, schools and bus stations, Sumar executions, torture, abductions, child soldiers recruitment, looting and destruction of public, private and religious property. The group carried out at least 150 attacks through 2016, including 22 suicide attacks, killing at least 260 civilians. There was a systematic warfare against civilians around Lake Chad. In January alone, more than 60 civilians were killed in 9 suicide attacks. In February, 2 female suicide bombers attacked a funeral, killing 8 adults, 1 child and wounding over 40. A week later, 2 other female suicide bombers killed 24 and wounded 112 in a crowded market in Mémé.