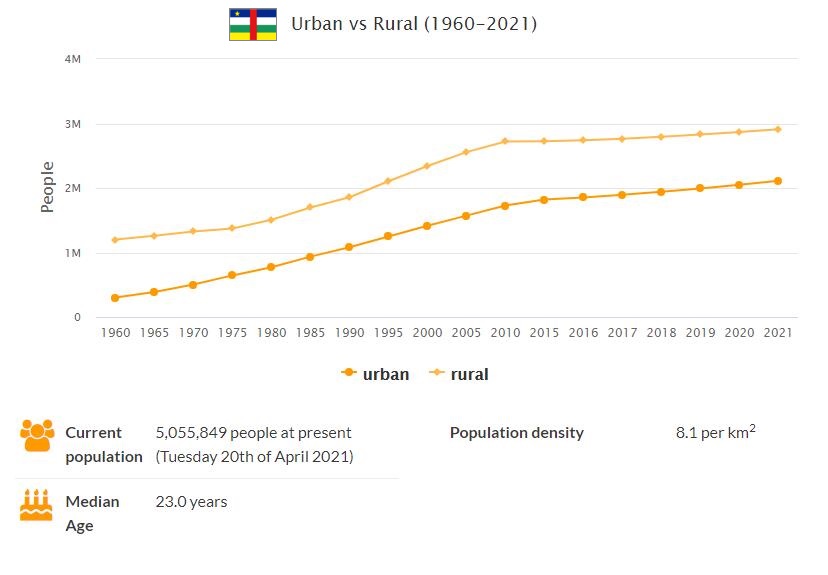 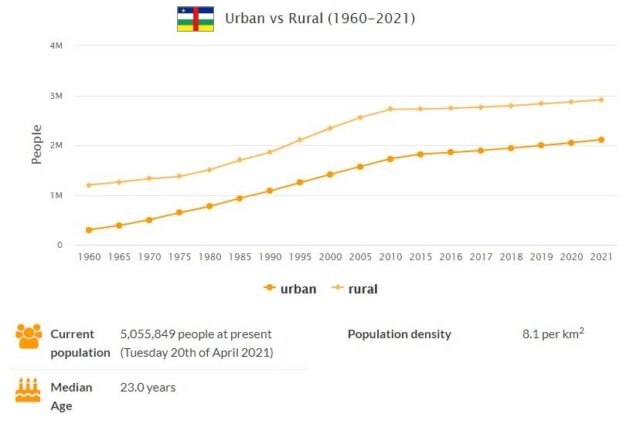 In 2004, there were 8 physicians per 100,000 residents in health care. The corresponding figure for nurses and midwives was 38 per 100,000 residents. Only half of the Central African Republic’s residents have access to basic health care. The government uses about 4 percent of GDP for the health sector. 66 percent of the population has access to clean water, 31 percent to satisfactory wastewater. The government has continued to pursue the trade union movement. The largest trade union central organization is the Union Syndicale des Travailleurs Centrafricains (USTC), which organizes, among other things, public employees. The civil servants have striked several times in protest against being discriminated against by union members and wages being paid irregularly. Check to see Central African Republic population.

Part of French Equatorial Africa (with the name of Ubanghi-Sciari), the C. Republic obtained independence in 1960. The first President of the Republic, D. Dacko (Mouvement pour l’évolution sociale de l’Afrique noire, MESAN), established an authoritarian one-party regime. Growing discontent (economic difficulties and corruption) favored the coup that brought JB Bokassa to power (1966), who established a dictatorial and repressive regime and proclaimed the Central African Empire (1976). In politics remained the maintenance of a privileged relationship with France, while the already precarious economy of the country suffered a further deterioration. Bokassa deposed (1979), the republic was restored (Constitution of 1981) and power was assumed by A. Kolingba, which stifled any attempt at opposition, but which at the beginning of the 1990s yielded to pressure for the creation of a multi-party system. The general elections of 1993 saw the victory of the Mouvement pour la libération du peuple centrafricain (MLPC), whose leader, A.-F. Patassé, became president of the Republic. The tension caused by the new Constitution (1995), contested by the opposition because it strengthened presidential prerogatives and gave scarce guarantees of freedom of expression, economic difficulties and the disruption of state finances, led to a period of great uncertainty and then to an insurrection military. Negotiations followed (with the intervention of French troops, then replaced by the UN ones) and then the legislative elections (1998) which saw the affirmation of the Mouvement pour la libération du peuple centrafricain and the presidential ones (1999) which were won by Patassé. At the end of the UN mandate (2000), the country was once again in a situation of instability that resulted in a 2001 coup attempt which, repeated in 2002, led to General F. Bozizé in 2003, supported by Chad, to proclaim himself president and to launch a new Constitution (2004). Bozizé was confirmed in 2005, but soon after a new rebellion movement against the central government gained important positions. In 2006, France intervened in the internal conflict in the country against the rebel forces stationed in the North-East, offering logistical support to the Central African army, until the agreement between the government and the guerrillas signed in 2007 with the mediation of Libya. Thanks also to the intervention of a United Nations peacekeeping mission, it was possible to start a process of reintegration of the former rebels into the political system, which took place in January 2009 with a government of national unity; however, the north of the country continued to be crossed by clashes. In March 2013 Bozizé, who had been re-elected president in 2011, was forced to flee following the fall of the capital Bangui into the hands of the rebel militias of the Seleka Front, whose leader M. Djotodia has proclaimed himself the new head of state; in January 2014, in a climate of persistent tension and sectarian violence, it took over ad interim C. Samba-Panza, with the task of leading the country until new elections.In December 2015 the constitutional referendum took place which led to the adoption of a new Constitution, which provides for the direct election of the President of the Republic; in the same month the legislative consultations and the first round of the presidential consultations took place, in which over thirty candidates confronted each other, none of whom however achieved an absolute majority. In the ballot, initially scheduled for January 31, 2016 and postponed to the following month, the former premier A.-G. Dologuélé and FA Touadéra, the latter being the winner with 63% of the votes. Neither the government nor the international contingents committed to containing violence in the country (in particular the mission of the Un Minusca and the European one Eufor Central African Republic, led by France), however, managed to guarantee a new path of political-institutional stabilization, and only in February 2019 was a peace agreement reached in Khartoum and ratified in Bangui between the government and the armed groups that control much of the national territory; to encourage the formation of a national unity government, in the same month Prime Minister S. Sarandji, in office since April 2016, resigned, succeeding F. Ngrebada. In December 2020, President Touadéra obtained a second term, winning 53.9% of the votes in the first round.

Bangui, the capital of the Central African Republic; 734,300 residents (2012); The population has grown sharply since the country’s independence in 1958, mainly due to immigration in connection with the drought in the 1970’s. The city was founded in 1899 by the French colony administration on the river Oubangui, which for many years was the city’s only transport connection to the sea. Bangui is clearly divided into a modern center with associated affluent suburbs and spontaneously arising slums without water and electricity. Most of the residents live in the slum, and here are the largest markets. The city has few jobs in industry and administration; the majority of the residents feed in the so-called informal sector of trade and small jobs; many are unemployed. The city’s need for timber and firewood has led to predatory operations on the resources of the surrounding rainforest and savanna.