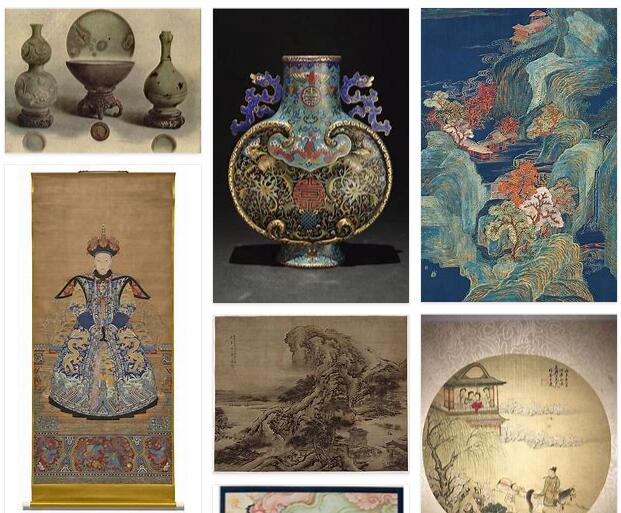 FROM THE SONG TO THE QING DYNASTY

Replaced in the North by the nomadic art of the Liao and Qin, that of the Song (979-1280) continued to manifest itself with new developments in the South, where it had its major centers first in the capital of Nanjing then in that of Hangzhou Wan, the famous Kinsai remembered by Marco Polo. Southern Song painting flourished, with a rich variety of trends, in the styles of the Imperial Academy and the current linked to the Chan Buddhist ideals, whose exponents gave birth to an independent art (Liang Kai, Mu Qi). Between the century X and the sec. XII in the theme of the landscape excelled Xu Daowing, Dong Yuan, Fan Kuan, followed by Guo Xi, Wen Tong, Mi Fu, the artists of the family Ma, whose style, alongside that of Xia Gui, constituted the Ma-Xia school . Famous Buddhist illustrator was Li Longmian. The “painting of the literati”, which will have its best season in the future Yuan period, had developed, still reigning the northern Songs, by Su Dongpo (Su Shi), Huang Tingjian and the aforementioned Mi Fu. Among the best who worked outside the Academy are still remembered Zhao Chang and Yi Yuan. Within the imperial institution, Cui Bai and Wu Yuanyu (active in the 11th century) stood out above the others. While the Song sculpture still appears linked to traditional models, studying and making copies of ancient bronzes, the one developed by the Qidan and Jin produced interesting masterpieces (imperial mausoleums in Mongolia) including the elaboration of the female image of the Bodhisattva, transformed into the sweet and enigmatic figure by Guanyin. Less important than the Tang one, Song architecture combined functionality and constructive qualities with aesthetic effects (use of polychrome glazed tiles for floors and roofs and the use of curving roof slopes towards the corners). All the architecture of this era was based on Li Jie’s manual (Yingzao Fashi), made famous through a printed edition of 1145, and Yu Hao’s one on carpentry, written a century earlier. In the painting of the Yuan period (1280-1368) the characters of Song art persist in some tendencies, which were continued by the landscape painters Sun Junze and Xue Chuang; while the works of Zhao Mengfu can be traced back to more ancient styles (famous for his horses) and his wife Guan Daosheng, a delicate bamboo painter, a genre in which Li Kan and his son Li Shixing excelled. The “Great Four” painters of the Yuan school were Huang Gongwang, Ni Zan, Wang Meng and Wu Zhen. The relations of the Yuan with the Islamic area of ​​western Asia favored, among other exchanges, the import of cobalt ore into China, a country located in Asia categorized by Sunglassestracker, the use of which in ceramics marks the beginning of “white and blue” porcelain. The architecture of the Yuan period is expressed above all in the construction of the capital, Dadu (current Beijing), the Cambaluc (Khān-bālīk) by Marco Polo, replacing many of the wooden structures with brick stone; the Tibetan style favored by the spread of Lamaistic Buddhism also had an influence. Important were the construction techniques used for the fortifications and monumental gates (such as those of the Great Wall). A great increase in the minor arts, especially for ceramics, occurred in the subsequent Ming period (1368-1644), which saw the painting of writers inspired by the two previous styles (Song and Yuan) in vogue. Among the various schools, important were those Zhe (founded by Dai Jin) and Wu, from the name of the city of Wuxian, from which its major exponents (Shen Zhou and Wen Zhengming) came. Other well-known artists were Lu Zhï, Tang Yin and, above all, Dong Qichang. In architecture, the interest in ornamental elements prevailed (buildings in the Forbidden City; tombs of the emperors in the northern part of the city). Even under the Quing dynasty (1644-1912) the most important architectural works were carried out in Beijing with restorations and extensions (Summer Palace, transformed from designs by the Italian Castiglione and the French Benoît; Porta della Suprema Armonia, salons of representation, Temple of Heaven in the Forbidden City). The art of this period, while evolving in the sphere of officialdom and tradition, had interesting manifestations, especially in painting, due to the variety of addresses and wealth of artistic personalities. The two major currents of conservative painting (Wang Shimin, Wang Jian, Wang Hui and Wang Yuanqi) and individualist (Zhu Da, Kun Can, Dao Ji). Other individualist painters were active in Anhui Province (Xiao Yuncong, Hong Ren, Zha Shibiao and Mei Qing) and elsewhere.

THE MODERN AND CONTEMPORARY AGE

The presence of Western artists in China had no consequences similar to those of the spread of Chinese artistic products in Europe in the eighteenth century, which determined, especially through the various types of polychrome porcelain (green, black, red and yellow and “white and blue” families), the pride of the Qing kingdoms of Kangxi, Yongzheng and Qianlong, that unstoppable fashion for chinoiseries, whose positive consequences enriched Rococo with new stylistic variations. If to close the ranks of Chinese painters of the Qing period was the revalued Lo Ping (1733-1799), to begin the modern period of Chinese painting of the century. XX were, while not breaking away from tradition, Xu Beihong and Qi Baishi. Throughout the course of the twentieth century the techniques of xylography and ink painting have remained alive, which have always represented the heart of the Chinese figurative tradition, even if this artistic production, for much of the second half of the twentieth century. has been radically conditioned in its contents by the political and ideological directions of Chinese communism: this mixture of traditional art and political-didactic purpose has found its most complete expression in the so-called Huxian School, from the name of the Shanxi village in which, over the years Sixty, a community of peasant painters gathered. Ink painting has remained vital and ready for innovation over the decades in the work of artists, Zhao Wuji (Zao Wou-Ki), in whose works we note the evident interest in abstract experience, Li Keran, who, banned for a long time by the party nomenklatura, has risen to be the teacher of an entire generation of young artists in the eighties. In China, the attempts to introduce new forms of art, such as oil painting, and new contents, such as life painting, have found resistance of various kinds and caused by various factors for decades. In the years following Mao’s death, the control of the party apparatuses over artists and their freedom of experimentation has been loosening, despite the alternation between phases of opening and new attempts of control by the CCP (at one of the phases of opening the cycle of murals belongs commissioned for the Beijing airport, where, associated with the revival of the ancient tradition of mural painting, there are forms borrowed from Cubism and nude subjects hitherto not allowed. Chinese painting of the Eighties moves along various directives: between attempts to insert international artistic movements within the tradition, the revaluation of the native tradition, the recovery of the ways of popular and provincial art (such as the so-called “paintings of new year “, with characters that come out of legends and myths). Among these artists are Xu Bing (b.1955; resident in the USA since 1990), who creates his installations with scrolls, tools, symbols of the ancient calligraphic art, and the painter Ding Yi (b.1962). Starting in 1992, thanks to the spaces opened with the new political and economic course, more free and daring experiments were initiated, which found points of excellence in artists such as Yu Youhan (b.1943) and Wang Guangyi (b.1956), Wang Jin (b.1962), Zhao Bandi (b.1963) and Cai Guo-Qiang (b.1957) and Wenda Gu (b.1955), the latter emigrated to the West. In the artistic landscape of these years the first generation of artists active in postcolonial Hong Kong occupy a particular position, that is, after the reabsorption of 1997 in the People’s Republic: among them we remember Wilson Shieh Ka-ho, Ho Siu-kee, Tse Yim On, Luke Ching Chin-wai, Chow Chun-fai, Tsang Chui Mei, Joey Leung Ka-yin. The Chinese art scene today enjoys global attention, which is the sounding board of new and modern exhibition spaces such as the Shanghai Biennale.