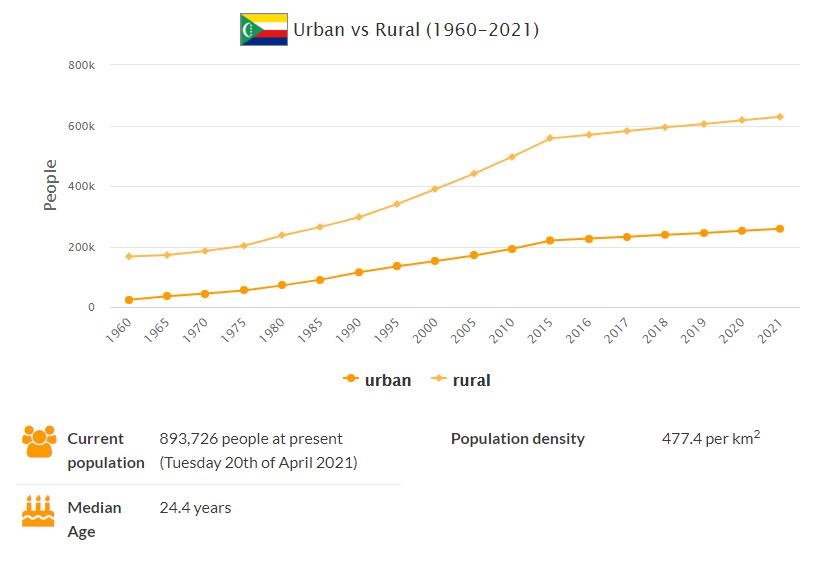 In 2006, 25 percent of toddlers were underweight and toddler mortality was 68 per thousand (the corresponding figures in 1990 were 120 per thousand). Maternal mortality in 2005 was 400 per 100,000 births. About 3 percent of GDP was used for health care. In 2006, 85 percent of the population had access to clean water and 35 percent to satisfactory wastewater. Visit AbbreviationFinder to see the definitions of COM and acronym for Comoros. 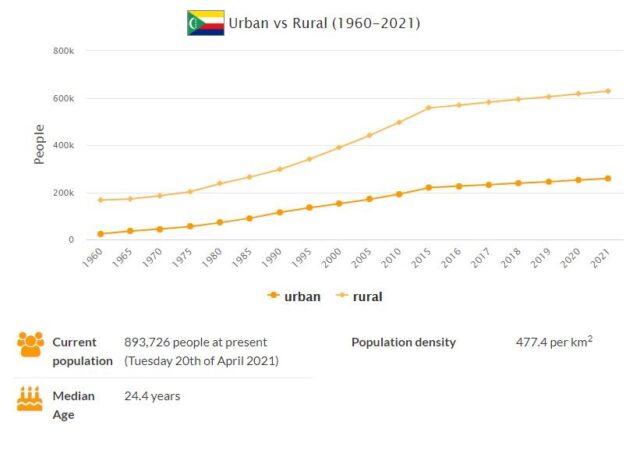 The French colonial power did everything to prevent the formation of trade unions. In the late 1960s, banking and customs officials made efforts to organize themselves. Only in connection with independence were trade union organizations formally formed. Today there are two trade union organizations in the Comoros, the Union des Travailleurs den Comores (UTC) and Union Syndicale (US). Unemployment is high, over 20 percent (2003). Check to see Comoros population.

Subjects from the 10th century. under Arab influence, the Comoros were ruled until the 19th century. by sultans of Arab or Shirazic origin. Passed under the control of France, the islands were subjected from 1914 to the colonial administration of Madagascar; temporarily occupied by the British during the Second World War, became French overseas territory in 1946 and in 1961 obtained internal autonomy. In a referendum held in 1974, the majority of the population of the archipelago opted for independence; the support granted by France to the island of Mayotte, which alone had expressed itself against it, led to the unilateral declaration of independence (1975) by the Parliament of the Comoros and the secession of Mayotte. After a few months the new state was admitted to the United Nations, which repeatedly invited France to withdraw from Mayotte; the latter, however, reconfirmed its desire to remain united with France and in 1976 obtained from Paris the special status of an overseas territorial collectivity.

The rupture of relations with Paris contributed to fuel the political instability of the new state. The first President of the Republic, A. Abdallah, was deposed in 1975 in a coup d’état led by the progressive leader A. Soilih. Elected president in 1976, he attempted to give life to a revolutionary experience but was in turn overthrown and killed in May 1978 by French mercenaries who restored Abdallah to power. An Islamic Federal Republic was proclaimed; Abdallah, elected president, established a one-party regime and re-established relations with France. Discontent with his authoritarian policy, the persistence of economic difficulties and the unresolved Mayotte issue continued to fuel internal tensions, favoring repeated coup attempts. In 1989 Abdallah was killed in a palace conspiracy that brought the mercenary leader, B. Denard to power, however immediately forced, by French intervention, to take refuge in South Africa. The agreement reached the following year between the main political forces, which allowed the restoration of a multi-party system and the election of SM Djohar to the presidency of the Republic, did not prevent new coup attempts. In 1997, political stability was further threatened by the separatist revolt that broke out in the islands of Anjouan and Mohéli, which was resolved after bitter clashes in 2002 with the launch of a federal-type constitutional reform, with broad powers in each of the three main islands. Since 2004, to sanction the federalist path, the official denomination of the state has become Union of the Comoros. In 2006, the elections for the federal president saw the victory of Ahmed Abdallah Mohamed Sambi, Islamic leader of the island of Anjouan, who was succeeded in 2010 by I. Dhoinine. The first round of the presidential elections held in February 2016 to choose Dhoinine’s successor recorded the victory of the vice president of the country, M. Ali Soilihi, who won 17.6% of the votes against the 15% of M. Baraka and the 14.9% of A. Assoumani; in the ballot held in April the latter was the winner. In July 2018 the country approved by a large majority a constitutional referendum, strongly opposed by the opposition, to extend the terms of the presidential mandate by expanding its powers and putting an end to the system that provides for a shifts in the role of head of state between candidates belonging to the three main islands of the archipelago; Presented in the presidential elections of March 2019, Assoumani was reconfirmed in office with 60.7% of the preferences, while in the legislative consultations of January 2020 the politician’s party obtained 17 out of 24 seats.

In 2009, the island of Mayotte chose, in a referendum, to become the French overseas department.