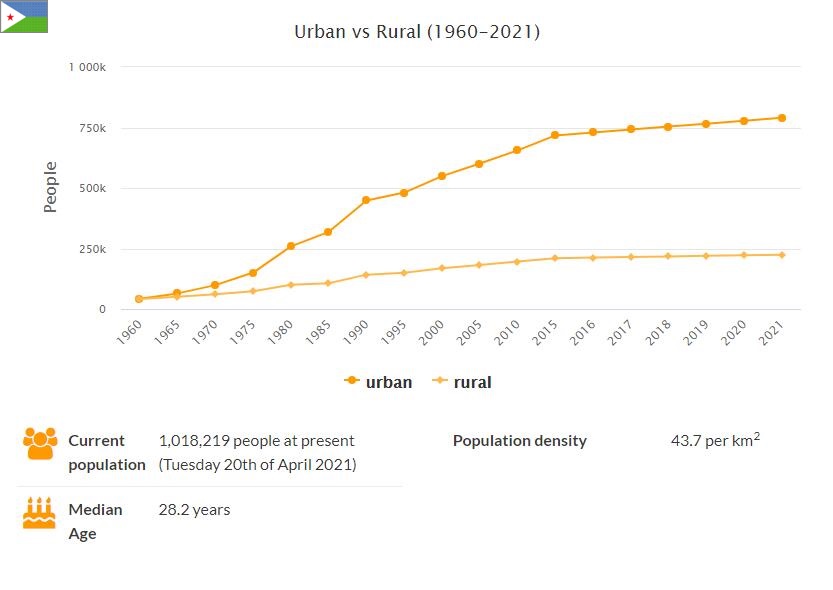 The civil war that erupted in 1991, combined with severe drought, has led to difficult living conditions for the people of Djibouti. About 40% live on less than a dollar a day. Infant mortality has fallen since the 1990s but is still high, 2011 76 ‰ (116 ‰ 1990). The infant mortality rate was 130 ‰ in the same year (175 ‰ 1990). About 29% of young children are estimated to be malnourished. Only one third of the population has access to basic health care, there is a shortage of medicines and they are often expensive. There are approximately 16 hospital beds per 10,000 residents. In 2005, there were 1 doctor per 5,000 residents. About 15,000 people are estimated to carry HIV.

Of the population, 77% live in urban areas. The urban population increased in 1990–2006 by 3.2% per year. Many who move from the countryside end up in shanty towns on the outskirts of the capital. Visit AbbreviationFinder to see the definitions of DJU and acronym for Djibouti.

A large part of Djibouti’s population consumes the drug khat daily. The government has tried to get the residents to stop the khatt chewing, but encounters stiff resistance from, among other things. the private company Sogik, which more or less has a monopoly on khat imports.

More than nine out of ten women are subject to genital mutilation, although this is prohibited by law.