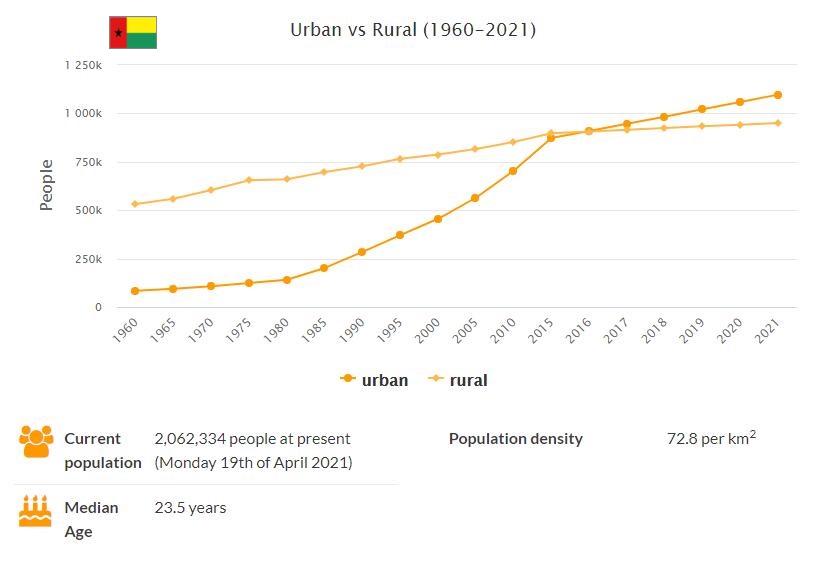 Guinea-Bissau is one of the world’s poorest countries, and the health of its residents is among the worst in the world. Visit AbbreviationFinder to see the definitions of GNB and acronym for Guinea-Bissau. Access to healthcare is limited; there are ten hospital beds (2009) and fewer than one doctor (2008) per 10,000 residents. Qualified personnel are available at only four out of ten deliveries. Of the total government expenditure in 2009, 4 percent went to health care. Tuberculosis, measles and malaria are among the most common causes of death. HIV/AIDS also harvests many victims; approximately 2.5 percent of the population aged 15-49 are estimated to be infected (2009). Every tenth child dies during their first year of life.

About 3/4 of the population lives in poverty (under US $ 2 per day). Every other resident has no access to clean water, which leads to the spread of disease. During the 1990s, two cholera epidemics broke out, with tens of thousands of infected and hundreds of deaths as a result.

Legislation prohibits gender equality, but women’s status varies between the different ethnic groups. In 2011, genital mutilation (female circumcision) was prohibited by law, a practice that is very common in some ethnic groups.

Almost as many girls as boys start primary school, but significantly more boys read on in secondary school. Only 10 percent of the country’s MPs are women. Check to see Guinea-Bissau population.

The ethnic composition of the population is rather heterogeneous; the largest group are the Balante (25%), followed by the Fulbe (20%), the Malinké (12%) and other less important ethnic groups. Animists prevail over Muslims, while 7 out of 10 residents are still illiterate.

The country is in serious backward conditions: 1990 estimates put the annual per capita income at around $ 180. 70% of the population practices a stunted subsistence agriculture and the primary sector contributes about 60% to the formation of the gross domestic product. In addition to crops intended for internal consumption (rice, corn, cassava, vegetables), some products are grown for export (peanuts, cotton, coconuts); about 70% of the exported value is made up of agricultural goods. 30% of the country’s surface is covered by woods and forests, another 30% by permanent meadows and pastures, and only 9% is used for arable land. The farm has 340,000 cattle, 400,000 sheep and goats, 290,000 pigs.

The industry is limited to modest agricultural and fishery processing plants. Near the capital there are agro-industrial complexes for the processing of rice and peanuts, as well as a small plant for the refining of sugar cane. Research is continuing to evaluate the potential of the subsoil: deposits of bauxite, phosphates (whose reserves are estimated at around 100 million tonnes) and oil have been found; prospecting activity continues. One of the biggest problems of the UK is represented by internal communications (only a modest percentage of the roads are tarred and allow traffic throughout the year); a large part of the movements still take place by water.

The port of Bissau is being refurbished. The construction of a dam on the Corrubal river with an attached hydroelectric power station is planned. An international airport is in Bissau.

Bissau, capital of Guinea-Bissau, West Africa; 419,000 residents (2012). Bissau, located at the outlet of the Geba River, is a port city with the country’s only modern port. From Bissau, for example, rice, copra and palm oil. The city has universities, research institutes and international airport.

Bissau was founded by the Portuguese in 1687 as the center of the slave trade and replaced Bolama as the capital of Portuguese Guinea in 1941.