The people of Liberia were severely affected by the civil wars of 1989-96 and 1999-2003, not least the many who were forced to flee their homes. In 2007, 95% of the population lived in poverty (below US $ 2/day). Only more than half of rural residents have access to clean water. Malnutrition is also a major problem. Infant mortality (children who died before the age of one year) was extremely high during and between wars, averaging close to 130 per 1,000 live births. In 2016, the corresponding figure was estimated to be 54. The average life expectancy was around 42 years in the early 1990s, but has now risen to 57 years for men and 61 years for women (2016). Check to see Liberia population.

Health care and welfare systems are only extended to a limited extent. In 1975, the National Social Security and Welfare Corporation was formed to administer pensions, sickness benefits and other social security funds. In 1987, this body introduced a national pension system as well as a system for occupational injury insurance. Visit AbbreviationFinder to see the definitions of LBR and acronym for Liberia. 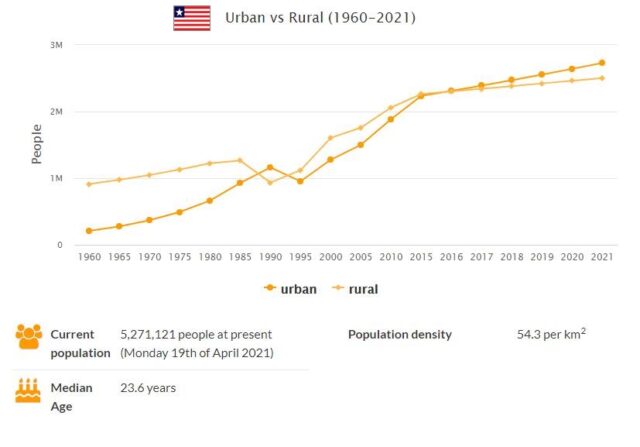 Access to healthcare is very poor; In 2009, there were seven hospital beds per 10,000 residents. Since the outbreak of the civil war in December 1989, health care in Liberia has been administered mainly by various aid organizations. The shortage of doctors is acute; In 2009, just over 120 doctors were active in Liberia, of which more than half were foreigners affiliated with international organizations. Qualified personnel are available at about half of all deliveries. Of the total government expenditure in 2009, health care costs accounted for about 17%.

The incidence of HIV/AIDS increased during the last civil war, largely because of the many rapes. In recent years, the trend seems to have turned down again; In 2009, 1.5% of the population aged 15-49 were estimated to be infected. However, the incidence of tuberculosis is increasing.

The provisional government of national reconciliation, launched in August 2003, the Accra agreements of October of the same year and the presidential elections of October-November 2005 marked the end of the bloody civil war, which began in 1989 and only briefly interrupted following the two Abuja agreements (ag. 1995 and ag. 1996). The election to the Presidency of the Republic of Ch. Taylor in 1997 had, in fact, plunged Liberia back into a condition of serious crisis. As early as September 1998 clashes resumed violent in the capital, while the new government implemented a repressive policy, severely limiting freedom of expression, closing independent newspapers and radios during 1999 and 2000 and transforming the country into a police state. Bearer of a personalistic vision of power, Taylor believed to increase his prestige also through the destabilization of neighboring states such as the Republic of Guinea and especially Sierra Leone, where he openly supported one of the anti-government armed groups, Revolutionary United Front (RUF).

The political framework changed in 2000 with the appearance on the scene of a new armed formation, the Liberians United for Reconciliation and Democracy (LURD), with bases mainly in the North, which had gathered part of the fighters from the dissolved fractions K (Kromah) and J (Johnson) of the United Liberation Movement of Liberia for Democracy (ULIMO), and which was joined starting in 2003 by another group, the Movement for Democracy in Liberia (MODEL), which quickly conquered the Southeast. In August 2003, with Monrovia now in the hands of the rebels, Taylor fled, finding refuge in Nigeria and leaving power to Vice President M. Blah. His decision was the result of pressure exerted by the African interposition forces, but above all by the United States, which had sent warships off the Liberian coast. Party Taylor, the rebel forces left the control of the capital to the troops of the Economic Community of West African States (ECOWAS), which, with 200 US troops, had to guarantee a truce between the parties. In September, the UN decided to send a peacekeeping contingent (UNMIL, United Nations Mission to Liberia) to support the transition, which involved disarming the various factions in its initial phase. In October, the US military left the country and in the same month a peace agreement was signed in Accra, which concluded negotiations under way for about a year, while G. Bryant, appointed already in August, became head of the provisional government. Launched in December 2003, the demilitarization program ended in November of the following year with a public ceremony that sanctioned the abandonment of the armed struggle by the main groups, the reintegration into civilian life of about 96,000 fighters and the return to their places of residence of approximately 500,000 displaced persons; on the other hand, the problem of returning home from beyond remained unsolved 200,000 Liberians who had sought refuge abroad. At the same time, the arms embargo was extended by one year and the embargo on the export of diamonds, the main source of financing for all the warring factions, by six months (extension renewed in 2005). The normalization process clashed with the enormous difficulties of a country devastated by civil war: according to international estimates, more than 250,000 people had died, while an entire generation of child soldiers had their only life experience in the war. Monrovia was now a city without electricity and running water, passed from 300,000 residents at the end of the eighties of the 20th century. to approximately 1,300,000 in the early 21st century.

Despite the precarious situation of the first years of peace, with an economy that seemed to largely depend on the presence of the UN mission (over 15,000 men) and international aid, the path towards normality continued, finding a very significant moment in the elections presidential elections of October-November 2005. Despite the presence of numerous competitors, these were resolved in the confrontation between the former soccer champion G. Weah and the economist and former UN official E. Johnson-Sirleaf. The latter, with a program that focused on national reconciliation, but also on firmness against all war crimes, was defeated in the first round, but won in the second with 59% of votes. Its success was influenced by the declarations of the ‘warlords’ in favor of Weah, probably considered a more maneuverable candidate, but above all the mobilization of women, engaged in a capillary campaign to elect, for the first time in Africa, a woman like head of state. From the legislative consultations, held in conjunction with the first round of the presidential elections, a strong political fragmentation emerged: the Congress for Democratic Change, Weah’s party, established itself as the first party with 15 seats out of 64, while the president’s party, Unity Party, went 8 seats. In 2006 Taylor was arrested in Nigeria and extradited, first to Sierra Leone (March) and then to the Netherlands (June), to be tried by the International War Crimes Tribunal.