Unemployment in Mauritania was estimated to be about 30% of the labor force at the end of the 1990s. Visit AbbreviationFinder to see the definitions of MRT and acronym for Mauritania. Almost half the population lives in poverty (under US $ 2 per day). Barely every other Mauretanese has access to clean water. 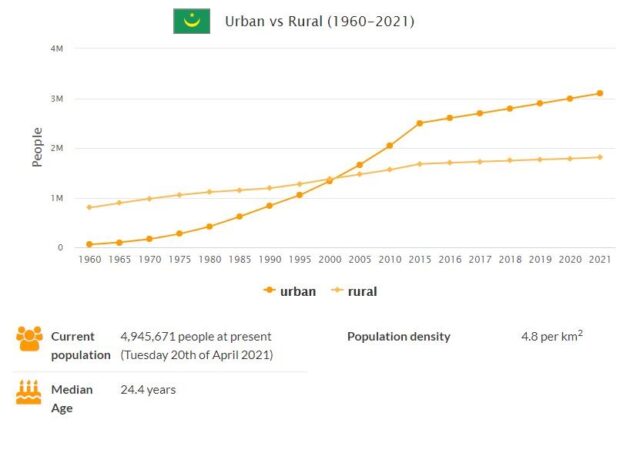 During normal years, nutritional intake is satisfactory, but the recurring years of drought cause nutritional deficiencies and increased spread of disease. Common causes of death are respiratory diseases, diarrhea and malaria. About 1% of the population aged 15-49 are estimated to be affected by HIV/AIDS (2009). Access to health care is poor; there are four hospital beds (2006) and one doctor (2009) per 10,000 residents. Qualified personnel are available at 60% of deliveries. In 2009, 5% of government spending was spent on health care.

Although women are still discriminated against in different ways, the trend seems to be towards greater equality. The man is considered the head of the family and polygamy is common in some of the country’s ethnic groups. However, the woman has the right to request a divorce and is usually given custody of the children. Despite poverty in the country, obesity among women is a problem linked to beauty ideals. Even though the mill has declined following repeated campaigns by the government, a large proportion of the country’s girls are still forced to feed. The government is also trying to fight the still-common tradition of genital mutilation (female circumcision). Education is available to girls as much as to boys. Of the country’s MPs, 22% are women. Check to see Mauritania population.

Gross national product (GNP, per resident and year): 1100 US$

Located in the northern tropic, Mauritania has a largely dry and hot desert climate. Only the cold Canary Current off the coast brings cooling, which often leads to fog formation in the coastal area. In the northern half of the country, precipitation falls in winter, but rarely more than 100 mm per year, in the extreme south it is 300–400 mm, mainly from July to October.
The average January temperatures are around 20–24 ° C, the July temperatures around 30–34 ° C, with summer maximum values ​​of up to 50 ° C.