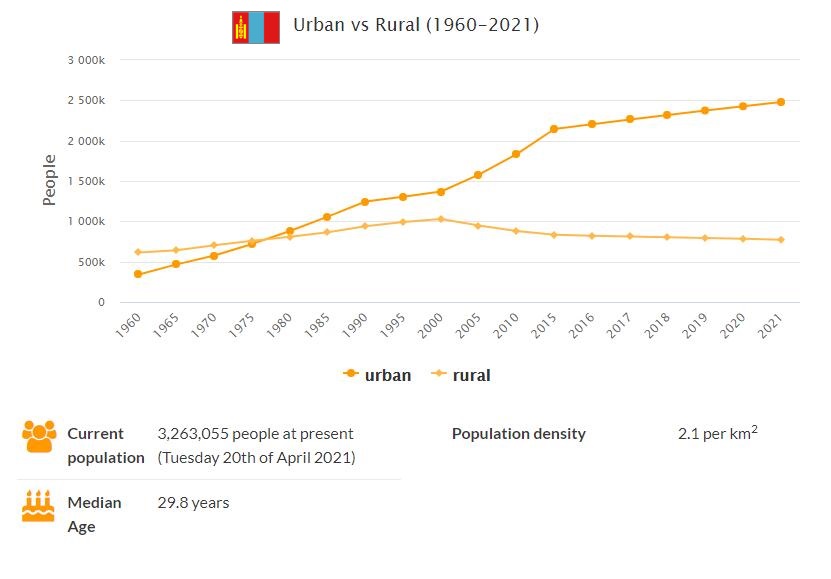 Since Mongolia’s transition to market economy in the early 1990s, social disparities have increased significantly, especially between cities and rural areas. Visit AbbreviationFinder to see the definitions of MNG and acronym for Mongolia. It has been strengthened over the years with disastrous winters when an average of 1/3 of the grazing animals have died, which has affected shepherd families in different parts of the country. During difficult years, many tent dwellers seek out families in the outer areas of the cities, and then usually return to the countryside. It has been estimated that 2/5 of the shepherd families have been worse off after the winter of 2010. Conversely, the number of livestock keepers in the country is increasing during periods when factories are closed down in the cities, as during the crisis in the textile industry 2004-05. In 2004, 36 percent of Mongolia residents lived below the poverty line; the proportion can thus vary widely from year to year. Similarly, it is impossible to state the level of unemployment in the country. Temporary work in an informal sector can cope with family survival during crisis years, but in many families you cannot pay insurance premiums and costs in connection with health care and schooling. International analysts therefore believe that the situation is worsening in the long term. 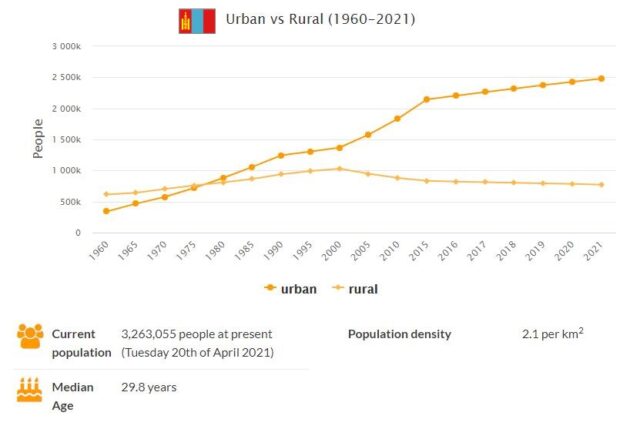 Social insurance is based on employment and is voluntary for self-employed and shepherds. The retirement age is 60 years for months and 55 years for women, but an increase is being discussed, as the proportion of older people is increasing and their health has improved. In 2008, there were close to 28 doctors and 76 beds per 10,000 residents. This is insignificant more than ten years earlier, but the quality of healthcare has improved significantly. Welfare calculations (HDI) placed Mongolia in 2015 at 92 among 188 countries in the world. Check to see Mongolia population.

On 23 August 1984, at the 8th special plenum of the PRPM, “in consideration of his health conditions and with his full consent”, Tsedenbal was removed from the posts of general secretary of the party and member of the politburo; to the elderly leader “great gratitude was expressed for the enormous services rendered to the Party and to the people”. He was succeeded by Ž. Batmönkh. In the months of June and July 1983, meanwhile, relations with the People’s Republic of China had experienced a sharp deterioration, due to the accusation made by Beijing of having forcibly expelled a large number of Chinese residents in China in early 1983.. (the total number of Chinese present in the country was 7000 ÷ 8000, mainly concentrated in the capital). The Mongolian authorities responded to the Chinese allegations by claiming that they were individuals who had broken Mongolian laws. An important economic, scientific and technical cooperation agreement, valid until the year 2000, was signed in Moscow between the Mongolia and the USSR on August 29, 1985. The mid-1980s saw a gradual improvement in relations with the People’s Republic of China, primarily due to the new Soviet orientation in foreign policy. On 9 August 1986 a consular treaty was signed between Mongolia and the People’s Republic of China, the first after 1949. The 19th Congress of the PRPM took place between 28 and 31 May 1986: there were 841 delegates representing 88,150 members, 73 foreign delegations from 66 countries. Batmönkh was re-elected as first secretary and the need for a restructuring of the Party apparatus in order to overcome the excesses of bureaucracy was stressed. In this sense, the provision adopted at the meeting of the Grand must be interpreted Khural of 11 December 1987, following which eight ministries were abolished and five new ones were created.

Between the end of 1989 and the beginning of 1990, after two years of apparent stagnation, numerous new political organizations were suddenly born, calling for reforms in both the political and economic fields: the largest of them, the Mongolian Democratic Union (UDM), founded in December 1989 and officially recognized in January 1990, throughout 1990 especially through its chief coordinator, S. Dzorig, it dialogued with the PRPM. Following the strengthening of the opposition movement, Batmönkh announced the resignation of the entire political office as well as the secretariat of the Central Committee. In April 1990 the PRPM held an extraordinary congress, renewing three quarters of the members of the Central Committee.

In May of the same year, the People’s Grand Khural adopted a law on the legalization of new ‘informal’ parties. Following the general elections of July 1990, 430 deputies were elected: 357 belonging to the PRPM, 14 to the UDM, 9 to the Mongolian Revolutionary Youth League, 6 to the Mongolian National Progress Party, 4 to the Mongolian Social Democratic Party, 39 were independent. In September the Grand Khural of the people elected the first President of the country in the person of Fr. Očirbat. In November 1991 Ž. Urtnasan was elected president of the Great Khural, in place of Ž. Gombožav.