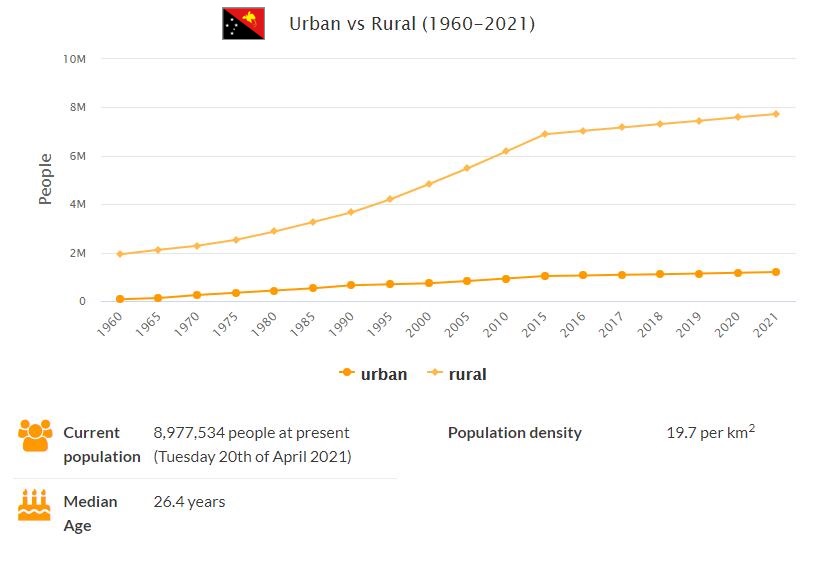 Papua New Guinea is one of the poorest countries in its part of the world and has low values ​​for most indicators used to indicate social conditions. Visit AbbreviationFinder to see the definitions of PNG and acronym for Papua New Guinea. Poverty increased significantly during the decade until 2006, when more than half the population lived below the nationally determined poverty line. Despite economic growth in the latter part of the 1990s, conditions have hardly improved. 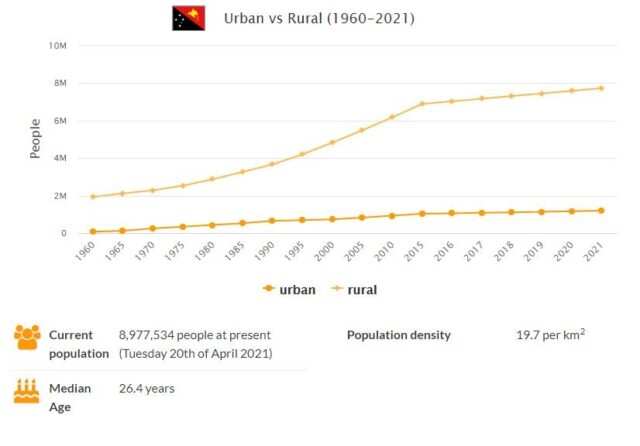 Large parts of the country are sparsely populated and have difficult to access terrain. There are mostly missing roads and it is costly to arrange health clinics and other community services. Access to clean water and sanitary conditions is also a problem in rural areas. Only about half of the mothers had the help of any medical professional at birth.

In 2006, only 6 percent of the employed were estimated to be in the formal sector, which means that only a small part of the population is covered by social insurance. Payment to pension insurance is compulsory for those who are employed by companies with 15 employees and more. The pension is paid out as a lump sum at the age of 55.

More than 80 percent of the residents live in traditionally organized rural communities where most of them run self-catering agriculture. There are largely no other jobs, and underemployment and unemployment drive young people to the cities. They are still regarded as members of the clan in their hometown, and since most people do not find work in the cities, they are not integrated there. As unemployed in the suburban slums, they are drawn to crime – juvenile delinquency is a serious problem in Papua New Guinea’s cities. Among these young people, HIV is also spread. In the country as a whole, 1.5 percent of adults aged 15-49 are affected by HIV/AIDS, but in the capital, the proportion is 3 percent.

In general, women are considered and treated as inferior. They are disadvantaged in all legal respects, as well as in economics and politics. About 70 percent of all adult women have been beaten by their husbands, and rape is common.

The music traditions are richly varied and reflect the ethnic diversity. Song is an integral part of social life and is also used in ritual contexts, at local parties, mourning ceremonies, for dancing and at festivals. Alternating songs between leader and group are common.

Population density in Papua New Guinea is low, and people mostly live in small villages. The villages range in size from up to 2000 inhabitants to small seminomadic groups of only 10-20 people in the dense rainforest. Important cities are the capital Port Moresby, Mount Hagen, Goroka, Rabaul, Lae, Madang, Wewak and Kiunga. In 2016, 13.4 percent of the population lived in cities.

Life expectancy is 65.5 years (2016). Both child and maternal mortality rates are high, and on the UN Development Index, Papua New Guinea is the lowest of the ranked Pacific countries (153 of 187 in 2018).

English, took pisin (pidgin English) and hiri motu are official languages, but beyond that there are over 800 different languages ​​spoken. Hand in hand with the linguistic variety follows a cultural diversity, and there are as many ethnic groups as languages. There are two main groups in terms of both language and culture: the Papuan and the Austronesian. The Papuans are thought to be descended from the people who settled here while the island was still connected with Australia. The Austronesians came in a recent migration wave, made up of seafaring people from Southeast Asia. Austronesian languages are mainly spoken on the north coast of the mainland and on the islands in the north and northeast.

Christianity is the largest religion in Papua New Guinea. The majority belong to various Protestant denominations, while about 25 percent are Catholics and about 10 percent are Seventh-day Adventists. According to the 2000 census, only 3.6 percent were registered as non-Christians.