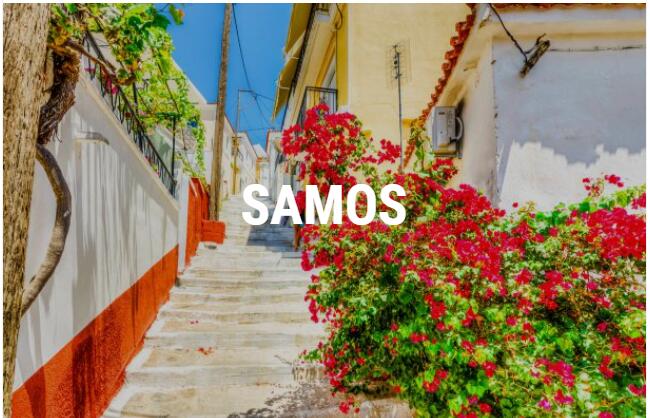 Known for its beaches and greenery, Samos is a popular holiday destination. Samos has managed to maintain its Greek atmosphere despite growing tourism. One of the sunniest destinations in the summer, the vibrant island attracts tourists with its beaches, culture and lush landscapes.

Greek- owned Samos is located off the coast of Turkey in the Aegean Sea. With a size of about 470 square kilometers, Samos is the eighth largest island in Greece and one of its most fertile lands.

In ancient times, Samos was inhabited by numerous great thinkers of his time, such as the writer Aesopus and the mathematician Pythagoras, whose title city is still to be found on the island. Over time, Samos has been a coveted area and has belonged not only to the Greeks but also to the Romans and Turks.

The island has a vast cultural and historical heritage and Samos is home to UNESCO World Heritage Sites such as the ruins of the Temple of Heraion more than 2,500 years ago. The most famous attraction of Samos, the Eupalinini Water Tunnel, is located in the city of Pythagorion.

In Samos you can spend an active holiday hiking and cycling, or hiking to the neighboring islands and Turkey. The main tourist destinations of the island are Vathi, Pythagorion, Kokkari and Votsalakia.

Samos has more than 200 beaches.

The climate in Samos is mild

Summers are the hottest tourist season in Samos – in many ways. During the summer months, the beaches of Samos are filled with sun worshipers and temperatures rise to 30 degrees. The warmest time in Samos is in July-August, but daytime temperatures well above 20 degrees can be enjoyed from May to October.

The coldest time in Samos is in January-February, when daytime temperatures are only slightly above 10 degrees. It also rains more in winter than in summer. Summers in Samos are sun-safe, as rainy days are very rare in May-September. 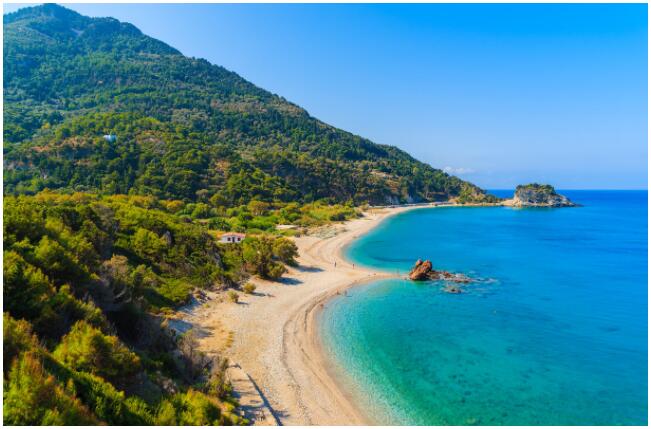 Lounging on over 200 beaches

Samos is especially known as a beach resort, thanks to the wonderful summer climate and numerous beaches. Samos has well over 200 different sized beaches from which the holidaymaker can choose. There are many types of beaches, from sandy beaches to pebble beaches.

One of the most stunning and popular beaches on the island is located between the towns of Vath and Pythagorion. Psili Ammos is often full of tourists, especially in summer. Also known is Tzamadou Beach, located just over 12 kilometers west of Samos Town.

Many of the island’s beaches offer water sports and sun loungers for rent. The services are good especially near the hotel areas. With young children, it’s a good idea to be careful on most beaches, as the beaches can be sudden.

Nightlife in the city of Samos

The capital of Samos, Vathi, is also known as the Kaima of the island, the city of Samos.

The city of Samos is one of the most famous resorts on the island. The small town offers a little bit of everything, making it ideal for a wide variety of holidays. In the city you can spend a relaxed holiday life, enjoy shopping, nightlife and beaches.

Nightlife in Vath is especially offered by nightclubs and clubs in the newer parts of the city.

Excursions to nearby islands and Turkey

From Samos it is easy to go hiking to the nearby islands and at the ferry distance there is the neighboring island of Patmos, for example. During the island jump, the traveler can explore monasteries, ruins, olive groves and sleepy little villages scattered along the archipelago, for example.

Samos is the closest of all the Greek islands to Turkey, so the island has good ferry connections not only to the neighboring islands, but also to the neighboring country. From Samos you can make excursions to Kusadasi, for example, which is one of the most popular tourist destinations in Turkey.

FLIGHTS, ACCOMMODATION AND MOVEMENT ON THE SAMOS 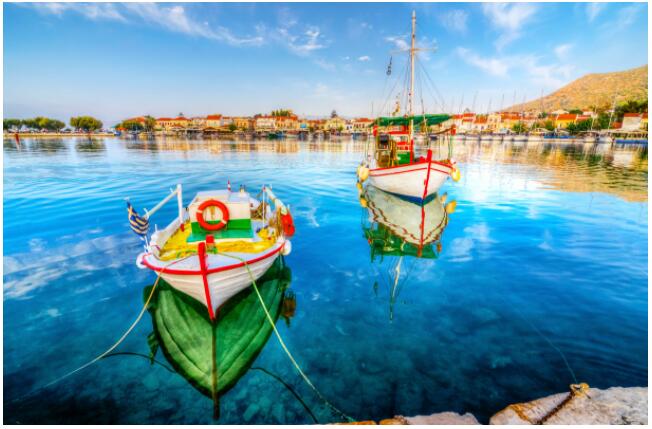 Samos has easy access to the sea. It is only a short trip to Turkey by sea.

This is how you travel from Helsinki

There are no direct flights to Samos from Finland, but the easiest way is to change planes once in Prague . Flights cost around € 300-500.

The international airport is located about 15 km from Vath, the city of Samos. One-shift flights take about five hours.

If you want direct flights to the destination, Samos is a popular package holiday destination in the summer season and you can find package tours to the island, for example, from Tuila and Matkavekka. Tour operators also sell only airline tickets for their holiday flights from Helsinki and the provinces, so you can also look for direct flights in Rantapallo’s sudden departure search .

There are plenty of hotels, especially in the largest cities on the island. Many hotels are located in city centers or near beaches. In addition to high-quality holiday hotels and family hotels, the island also offers smaller and cheaper accommodation options.

On average, a hotel night on the island costs about 60-70 euros. At its cheapest, accommodation in Samos costs 20-30 euros. Cheaper accommodation options are often located a few kilometers from major centers.

Getting around and car rental

A good way to get around Samos is by buses, whose route network covers all major villages and towns. Vath in particular has good transport links around the island. Bus travel is also affordable and attractions can often be reached for just a few euros.

If you want to explore the island’s scenery and more remote hamlets at your own pace, renting a car or scooter is a viable option. The roads are mostly in good condition, but the traffic culture is slightly different compared to the Finnish one. Taxis are quite expensive in Samos.

Samos has good ferry connections to the nearby islands and Turkey. 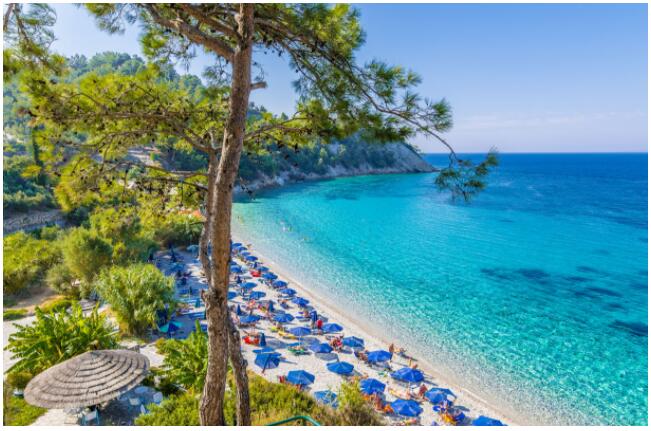 Located in Pythagorion, the ancient capital of the island, the Eupalinos Tunnel is one of Samos ’most famous attractions.

The tunnel dug by the slaves through the mountain was excavated during the rule of the pirate Polycrates. The more than a kilometer-long water tunnel is nearly 2,500 years old and one example of the island’s long history.

Archaeological excavations can be seen in Pythagorion, on the southeast coast of Samos, even in the city center.

One of the most famous excavation sites in the city is the ruins of the Temple of Heraion, dedicated to the goddess Hera. The Temple of Heraio dates back more than 2,500 years and has also been inscribed on the UNESCO World Heritage List.

The city of Pythagorion is named after Pythagoras, a famous mathematician who lived on the island of Samos for some time. The Pythagorean residential and educational cave can be visited in the village of Votsalakia, located about 60 km from the town of Pythagorion.

THE BEST OF SAMOS 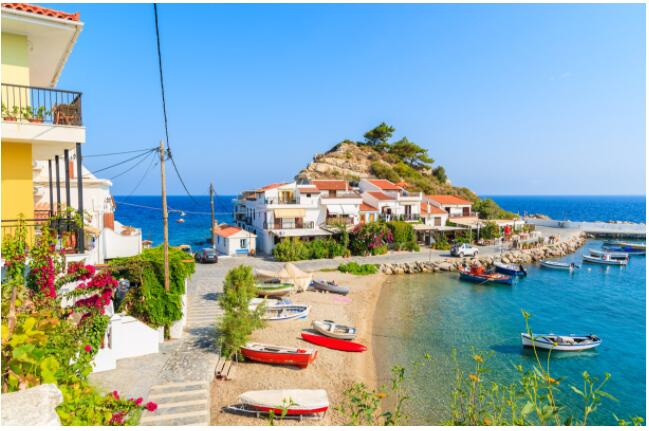 In the village of Kokkari you can visit to explore the everyday life of an authentic fishing village.

The best destinations in Samos