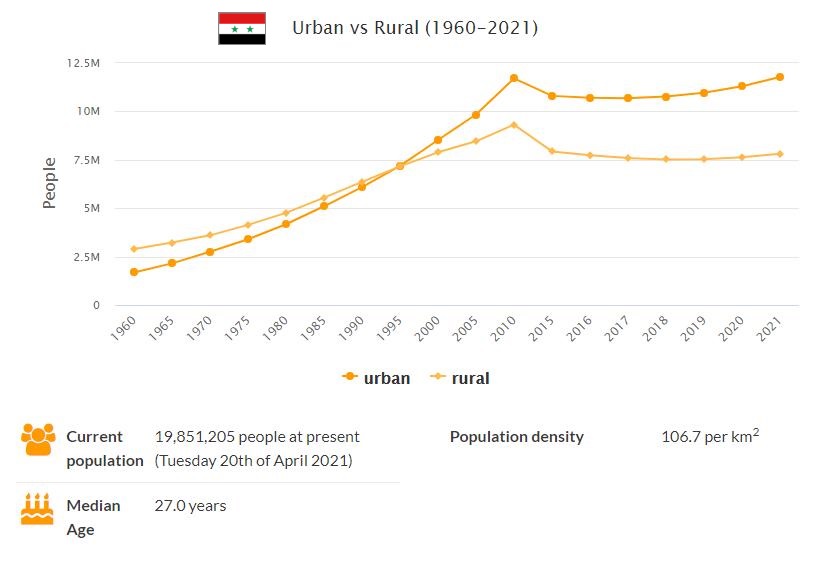 Syria has experienced relatively strong economic growth in recent decades. Unemployment was officially relatively constant at around 10 percent during the 1990s, but an over-sized public sector and long periods of military service camouflage a really higher unemployment rate. Syria’s women are low-skilled, and unemployment is also high among women in the labor force.

Public social insurance systems are relatively large, but because they are largely linked to employment, there are many Syrians – unemployed, rural workers, housewives and people working in the large informal labor market sector (about 30 percent of all working people, about 40 percent of GDP) – that are not covered by the security systems. The retirement age is 60 years for men and 55 years for women

Public health care is basically free of charge for Syrian citizens. However, it is mainly concentrated in the urban regions and people in rural areas have significantly less access to care. Lack of trained healthcare staff and underfunding has contributed to many Syrians relying on private care today. Private healthcare expenses account for just over half of the total health care costs in the country. However, the health situation in the country has, in a longer comparison, improved significantly. At 97 percent of all deliveries, qualified personnel are present (2009).

Syria is largely a patriarchal society. Women are legally as well as socially subordinate to men, both in social life and within the family. Visit AbbreviationFinder to see the definitions of SYR and acronym for Syria. 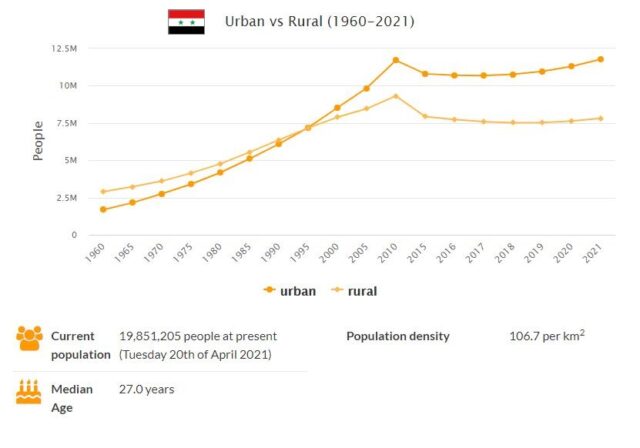 Also in February, the UN appointed former Secretary-General Kofi Annan as peace broker in the conflict. In late March, he succeeded in negotiating a ceasefire agreement with the Syrian government until its entry into force on April 12. Both the civilian and armed opposition were initially negative towards Annan and the ceasefire agreement, and did not believe Annan had “understood the situation in Syria”. In the weeks leading up to the ceasefire, the rebels launched a violent military offensive in Hama, which was met by heavy bombings by the military. In the days leading up to the April 12 deadline, the government announced it would not withdraw its military forces from the cities unless the armed opposition did the same. It was rejected by the armed opposition. The ceasefire on April 12 therefore only led to a short-term slowdown in the fighting. Still, the UN sent observers into the country to monitor the ceasefire. Opposition supporters in the Gulf states used the slowdown in the fighting to step up the supply of weapons to the opposition. At the same time, the government failed to pull its forces out of the cities.

In May elections were held for parliament. The previous parliamentary term expired in March 2011, but elections have since been postponed time and time again. Most of the opposition boycotted the election. The only participating opposition party was the People’s Front for Change and Liberation, which had 45 seats in the outgoing parliament. The official turnout was 51.26% – equivalent to the turnout in the United States. The outside world criticized the election, which did not involve the country’s real opposition, and therefore did not promote a resolution of the conflicts.

At the end of May, the village of Houla was subjected to a massacre that cost approx. 108 civilian life. The West immediately placed the responsibility on the Syrian military. Syria immediately placed the responsibility on «terrorists». Independent studies indicated that there had been major contradictions between the Sunni-dominated village of Houla and neighboring villages dominated by Alawites. Armed men from neighboring villages – possibly the regime’s Shabiha militia – had apparently attacked Houla and committed the massacre. It thus became an alarming event, indicating the beginning collapse of the ethnic and religious coexistence that had otherwise existed in the country. On June 1, the United Nations Human Rights Council condemned Syria for the Houla massacre by 41 votes to 6. The FSA subsequently announced that it was recording its full-scale armed activity.

On June 22, Syrian antiaircraft shot down a Turkish F-4 fighter jet over Syrian territory. The incident was close to triggering a Turkish attack, but it was revealed that the fighter aircraft had not flown over Syria at high altitude, but at low altitude and had therefore been shot down by ordinary anti-aircraft fire, and the aircraft was subsequently located in Syrian territorial waters. Turkey then failed to activate NATO’s “musketeers”, which would otherwise have quickly put Syria at war with NATO. The incident also marked Turkey being deeply involved in the destabilization of Syria. The country had set up a command center at a military base in Antalya as command and intelligence center for the FSA’s operations in Syria. The United States admitted in early August that it was involved in these intelligence and command activities in support of the FSA.

In mid-July, the International Red Cross recognized that Syria was in a state of war. The death toll had passed 20,000 by then.

In the summer of 2012, the Syrian military withdrew from the Kurdish areas of the northern part of the country. This power vacuum was not immediately filled by the Syrian rebel groups, but by the Kurds themselves. The two parties of the area – the Democratic Union Party (Partiya Yekîtiya Democrat, PYD) and the Kurdish National Council (Encûmena Niştimanî ya Kurdî li Sûriyê, ENKS) – agreed to form the Kurdish Supreme Council (Desteya Bilind a Kurd, DBK) representatives from each of the two parties. The council got its seat in the area’s largest city, Kobanê. The two parties also decided to form the People’s Defense Units (Yekîneyên Parastina, YPG) for the defense of the area. During July, the YPG threw the last remnants of the Syrian army out of Kobanê and several smaller Kurdish cities. During the fall, the YPG continued its offensive and fought several times with Syrian rebel groups. FSA. In early November, however, the FSA and YPG signed a peace agreement not to attack each other’s territories and support each other militarily. The armed conflict then increasingly became a stand between the YPG and the Islamist rebel groups. In May 2013, 21 of them signed a manifesto declaring the YPG to be “traitors to Jihad” and to purge northern Syria for the YPG and PKK.