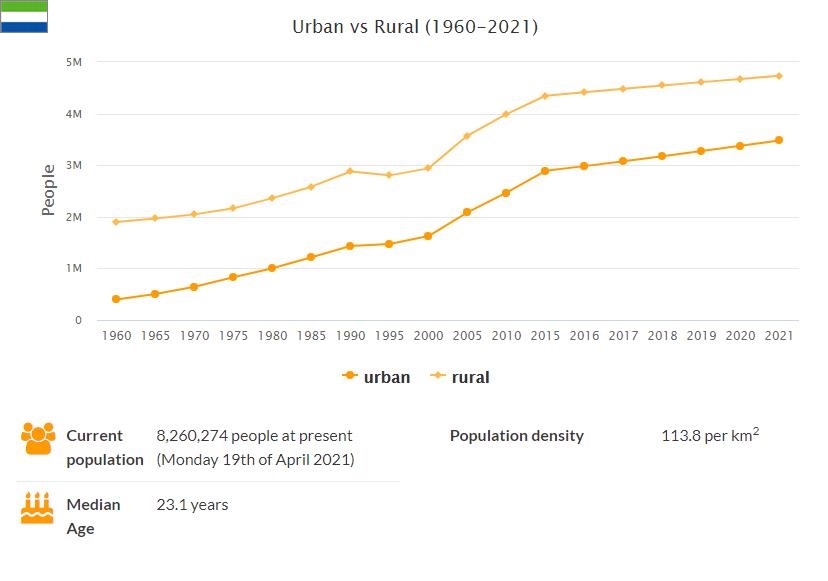 The fact that Sierra Leone is one of the world’s poorest countries is reflected in many ways in addition to the health situation: low degree of urbanization, low literacy and short life expectancy. Visit AbbreviationFinder to see the definitions of SLE and acronym for Sierra Leone. About 3/4 of the population lives in poverty (under US $ 2 per day). About half of the residents have access to clean water, in the countryside only one in four. 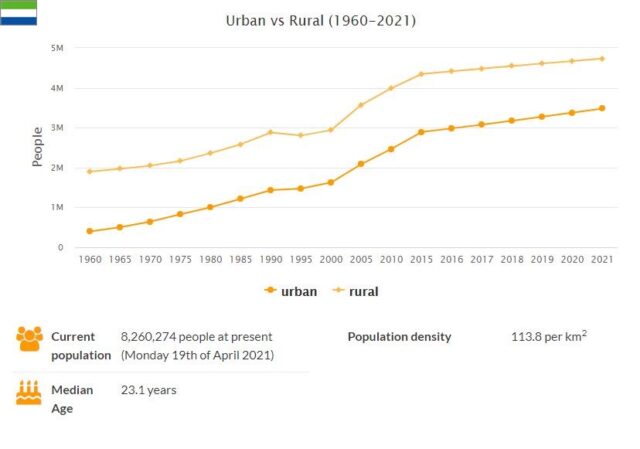 Despite major aid-financed investments in an expanded healthcare system with both hospitals and local health centers, the system is inadequate and the differences between the city and the countryside are large. There are four hospital beds per 10,000 residents (2006) and one doctor per 50,000 (2008). Qualified staff are available at just under half of the births, with high maternal mortality as a result. In 2009, 4% of government expenditures went to health care. The most common causes of death are lung disease, diarrhea, malaria, measles, tuberculosis and syphilis, as well as HIV/AIDS, which 2% of the population aged 15-49 are estimated to suffer.

The civil war in the 1990s hit the civilian population hard. Terrorism and devastation in rural areas drove large crowds of people to flee to the cities, where large parts of the service, not least the health care, collapsed. So-called street children have become a common sight, especially in Freetown. Mutilation and sexual violence were a common feature of warfare. The capacity to care for all traumatized people is lacking.

Several laws that strengthen women’s rights came into force in 2007. women’s trafficking has become illegal, but violence against women, including sexual violence, is still a major problem in the country. In addition, genital mutilation (female circumcision) is permitted and a widespread practice; 80-90% of women have been subjected to this type of surgery. Significantly fewer girls than boys are allowed to attend school. A large proportion of girls are married in their teens, which contributes to the low educational attainment of women. Of the country’s MPs, 13% are women. Check to see Sierra Leone population.

With the end of the civil war in January 2002, some 1.2 million refugees returned to Sierra Leone. However, nearly 50% of those who fled the country remained abroad. The living conditions of Sierra Leonean citizens are still unstable due mainly to serious health problems, accentuated by the Ebola virus, and the gaps in the education system. 40% of Sierra Leoneans do not have access to drinking water, infant mortality remains high (87.1 children died per thousand live births) and life expectancy at birth is around 45 years of age. Finally, almost one in two children is forced to work and the literacy rate stands at just over 44%. It is no coincidence that the human development index, drawn up by the Undp,relegates Sierra Leone to the bottom of the list, placing it in 183rd place out of 187 countries.

In addition to the lack of primary goods, the scourge of corruption must be remembered, which reduces the state’s ability to effectively deploy its interventions in key sectors of the economy and administration. Since the beginning of his mandate, President Koroma has launched an awareness campaign on the issue and, through the Anti-Corruption Commission, established in 2000, has launched an initiative devoted to transparency: those who hold political or institutional positions must publicly declare their income. Since 2009, the Commission has also carried out investigations which have led to the arrest of the Minister of Health and the suspension of the National Revenue Authority. The measure is starting to show its effects: in the ranking on the level of perceived corruption estimated on 175 countries,

Like all African countries, Sierra Leone’s ethnic composition is very diverse. According to the last census of 2008, the country has two majority ethnic groups, the temne and the mende, which represent about 70% of the total population. Other ethnic groups are the Limba (8%), the Kono (5%), the Mandingo (2%), the Loko (2%) and the Creoles (2%): the latter are the descendants of the free Jamaican slaves who were settled in the Freetown area in the late 18th century. The Liberian refugees who fled the civil war and settled permanently in the country also participate in the national ethnic picture, as well as small communities of Europeans, Lebanese, Indians and Pakistanis who represent about 15% of the total population.

Freetown, the capital of Sierra Leone in West Africa; 951,000 residents (2014). Freetown is located on the northern slopes of the rocky Sierra Leone Peninsula. The city has a Caribbean feel with pastel-colored 1800-ts houses with rust-red canopies, and many of the city’s neighborhoods with its steep streets are named after immigrants’ homes, such as Congotown and Bambaratown. The port is a safe, natural deep-water port that handles most of Sierra Leone’s foreign trade.

Freetown has been hit hard by the country’s bloody civil war. When ECOMOG (the peacekeeping force from West African countries) displaced the military in 1998, Freetown was exposed to aerial bombardments, and when the RUF rebels captured Freetown in 1999, approximately 150,000. After a few days, Freetown was captured back during fierce street fighting with many people killed.

Freetown was founded in 1787 by the British Granville Sharp as a sanctuary for freed and runaway slaves; it was the 1821-74 government city for Britain’s West African possessions. Freetown became the capital of Sierra Leone at independence in 1961.